HomeNewsNewsPress Release: THE NEXT SOCIETY – 18 Start-ups and 13 Researchers at the 2nd Innovators Academy in Tunis

Press Release: THE NEXT SOCIETY – 18 Start-ups and 13 Researchers at the 2nd Innovators Academy in Tunis 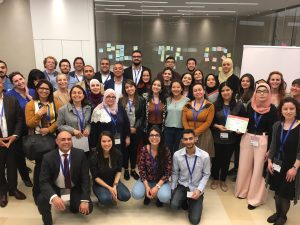 29/04/2019
On 23 and 24 April 2019 in Tunis, EBAN – the European Business Angel Network and APII, the Tunisian Agency for the Promotion of Industry and Innovation, with the support of ANIMA Investment Network, B@Labs and CONECT, organised the 2nd Innovators Academy of the THE NEXT SOCIETY initiative. This event launched the acceleration programme for the 2nd promotion of Start-up Booster Track entrepreneurs and the 1st Tunisian promotion of researcher-entrepreneurs accompanied by the Tech Transfer Booster Track.
Building on the success of the 1st edition of the Innovators Academy held in Milan in May 2018
The 2nd promotion of entrepreneurs supported by THE NEXT SOCIETY Acceleration Program for Start-ups, the Start-up Booster Track, met in Tunis during the 2nd edition of the Innovators Academy. The first edition was held in Milan in 2018.
21 entrepreneurs representing 18 start-ups from 7 countries in the Middle East and North Africa region took part in the two-day event during which they had the opportunity to work on their business plan and pitch, improve their intellectual property strategy in the presence of investors, business angels and financing experts during the rapid mentoring and coaching sessions in small groups. They also had the opportunity to connect with other selected entrepreneurs, researchers and expert mentors from the region to accelerate their project as part of the Start-up Booster Track.
“I am extremely satisfied with what is happening in the Tunisian innovation ecosystem. This started a few years ago and is now experiencing a real dynamic: there is an ecosystem, a legislative framework and the actors are working together. This event is a good example of working together, which is the best way to innovate and create value. We are a partner of THE NEXT SOCIETY and we believe in it,” said Noomane Fehri, former Minister of Technology and Digital Economy of Tunisia and co-founder of B@Labs, during his participation at the Innovators Academy.
Results of the Pitching competition and the jury:
The jury for the pitching competition was composed of the coaches who gave workshops and/or participated in speed coaching:
– Jean-Louis Brelet – President Emeritus | Sophia Business Angels
– Raffaele Buompane – Senior Adviser and Project Manager | EBN
– Marcel Dridje – President | Sophia Business Angels
– Nathalie Dumas – Founder and CEO | Flyingrhino.fr
– Audra Shallal – Board Member | Nordic Female Business Angel Network
– Laetitia Biciacci – Provence Promotion
– Hichem Radoine – Factory 319
– Godefroy Flament-Morgand – Thales Group
At the end of the competition, after careful deliberation, the jury awarded the following prizes:
– Best project – HawKar
– Best Presentation – City Locker
– Most Investment Ready Company – Rapid Expense
– Special Jury Prize “Coup de Cœur”: Fabricaid
Click here to access the booklet made for the event with the event programme, the bios of all coaches and the profiles of participating start-ups and researchers.