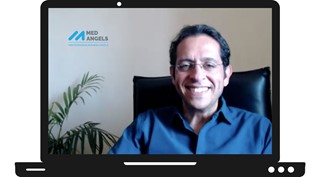 An interview with Tarek El Kady, founder of MED Angels, the business angel network that connects Europe, North Africa, and the Middle East: Watch the full video interview on YouTube

Tell us a few words about yourself and your background.

I founded Techne Summit five years ago and since then I’ve been intrigued by the whole technology ecosystem and by startups. A few years down the road, I started the Alexandria Business Angel Network and grew the network from six investors, up to almost 40, closing around 20 deals, five or six of them syndicated. This led us to think that work needs to be done on deal syndication, trust building and these opportunities in the region.

How did MED Angels start?

It started as an initiative from some core members, including the Alexandria Business Angel Network, as they were leading syndicated deals between more than three Egypt-based Angel Networks. That is how we realized that there was a huge gap in seed funding, not just in Egypt or North Africa, but also in several other countries.

What is MED Angels doing differently?

What we are trying to do is build a trustworthy network where like-minded investors that have the expertise in their industries, of course, but also in angel investing can connect. It provides an opportunity for soft landing, to grow and scale these portfolio companies in several countries. By talking about Mediterranean countries or the Mediterranean Business Angel Network, we’re connecting Europe with Africa and the Middle East.

What is the workflow?

What we usually do with Med Angels is facilitate deal flow and the syndication process. We sometimes receive opportunities that come directly from startups and we redirect those to local angel networks from their countries. Once they decide to close the deal or at least commit to closing a deal, we take that lead from them and circulate it to the rest of the members, so that we can have more networks or more individual angels join the round.

Why focus on the Mediterranean region specifically?

The Mediterranean region is overlooked. A lot of initiatives or networks are focusing on the Middle East, Africa, and Europe, but the intersection of those three was quite intriguing, specifically when these countries or cities that were on the Mediterranean used to have strong relationships a long time ago and trade was one of the things that connected these cities together. As time went by, these strong ties grew weaker instead of growing stronger with technology. So, what we’re trying to do is to connect these cities in a way that can reinforce economic development, based on a trusting relationship that starts from the bottom up.

Who can become a member of MED Angels?

As Med Angels we are not just open for angel networks but have different kinds of memberships: corporate members, accelerators and incubators. We have people who are feeding into the deal flow that we are closing as angels, but we also have people who are receiving the deals, the follow-on funding. We are more or less trying to complete the supply chain between the different stages that startups are involved in. Corporate members benefit from access to the latest innovation in their specific industries.

I’m already in an angel group, why should I join MED Angels?

There are a lot of benefits for members already in angel networks joining the Mediterranean Angels, specifically when we are talking about access to deal flow. If you’re a member from Europe, and you’re looking at opportunities in the Middle East or Africa, this is where you need to go because we have a lot of partners and a lot of members from these different regions  consistently providing us with proprietary deal flow. This is especially interesting to those who are looking to invest in industries that they have good knowledge in but are also interested in expanding their portfolios outside of their region.

Who is supporting MED Angels?

MED Angels is supported by Hivos, who are based in the Netherlands and by GIZ, a branch of the German government; these are our sponsors. We also have several supporters that supported the initiative a year and a half ago, in terms of outreach, motion and spreading the word about what you’re trying to do, and syndication.

EBAN members get a special offer: