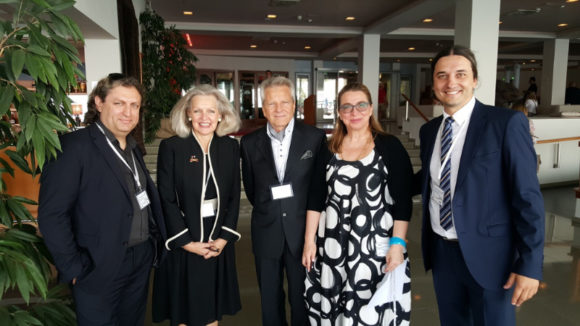 On 25-26 August, EBAN and a number of its members were invited by the President of Croatia, H.E. Kolinda Grabar-Kitarović to participate in and speak at the Three Seas — Adriatic, Baltic, and Black — Conference – Strengthening Europe: Connecting North and South.

Six Presidents from Croatia, Poland, Hungary, Lithuania, Bulgaria, Slovenia and more than 20 ministers from Austria, Slovakia, Romania, the Czech Republic, Estonia, and Latvia came together in this historic city to discuss: “Strengthening EU Energy Security: Connecting the Three Seas”. The conference focused on energy, security, transport, and business opportunities. The role of Business Angels in fostering private investment in all these areas was given a priority at the conference which closed with a panel on “Angel Investments – Supporting the Start-Up Community in the Three Seas Area” moderated and organized by Davorin Stetner, President of Croatian Business Angels Network, and including EBAN President, Candace Johnson, EBAN Board Member and Vice President of the Austrian Angel Investors Association, Selma Prodanovic, President of Hungarian Business Angels, Antal Karolyi, and President of Business Angels of Slovenia, Branko Drobnak.

The Conference was also joined by General James Jones, former U.S. National Security Advisor to President Obama and Mr. Liu Haixing, Assistant Minister of Foreign Affairs of the People’s Republic of China and Secretary-General of the Secretariat for Cooperation between China and Central and Eastern European Countries.

The second day of the Dubrovnik Forum began with a “Geopolitical Discussion” by the Foreign Ministers of the 20 countries of the “Three Seas” region. Here, everything was put on the table – migration, lack of funding by EU and private investors, the conflict in Ukraine, the problems of the EU neighborhoods from the East and the South, Brexit and the possible lack of defense to be assumed more and more by NATO, the need (or not) to integrate the Western Balkans into the European House, the lack of jobs and more. There was also positive recognition of the advances made by the region and the EU, the perspective of peace and prosperity for the more than 130 million people of the Three Seas Region, the successful collaborations between countries of the region which had led to improved infrastructure, be it energy, transport, digital highways, etc. The Deputy Foreign Minister of Turkey made a poignant plea to not forget all that Turkey has done in the last six decades to help Europe.

When it came time for the Business Angels to take the floor, the message was more than positive.  Cooperation between all countries of the Three Seas is abundant among the region’s Business Angel Networks and Syndicates.  Instead of fighting, Ukraine’s UAngel and Russia’s National Business-Angels Association cooperate.  Even small angel funds such as the one presided over by the Hungarian Business Angel Network‘s President Antal Karolyi, invested 2.7 million Euros and enabled 100 new jobs. Business Angels of Slovenia President Branko Drobnak spoke of a spate of new entrepreneurs growing up in Slovenia. Austrian Angel Investors Association Vice President Selma Prodanovic pointed to the cooperation between the Austrian government and the business angel community to help “scale-up” start-ups through mentoring and smart money.  EBAN President Candace Johnson spoke of the role that one of Europe’s first Business Angels, Count de Kergolay had played in helping create SES, Societe Europeene des Satellites from Luxembourg and making it be the largest satellite system in the world, born in Europe from one of Europe’s smallest country, Luxembourg! EBAN’s role in creating ABAN (African Business Angels Network) and MBAN (Middle East North Africa Business Angels Network) was highlighted in the EU’s Eastern and Southern neighborhoods where we all co-invest across borders to help our entrepreneurs access the growing EMEA Market.  The women were not to be forgotten with Croatia’s President and the Rising Tide Europe initiative evoked several times. Moreover, EBAN is very proud of the role it has played to help spark the Turkish Entrepreneurial Eco-System and our partnership with the Turkish Borsa which has resulted in Angel Investors being able to invest in start-ups around the world via the Turkish Borsa.

A particularly happy moment during the conference was the signing of the agreement between CRANE (Croatian Business Angel Network) and the Croatian Chamber of Commerce, attended by the President of Croatia, (see picture above).  This is a beautiful example of the agreement already signed between EBAN and the International Chamber of Commerce to foster and promote Business Angels and entrepreneurs.

EBAN would like to thank Davorin Stetner, Advisor to the President of Croatia and President of the Croatian Business Angels Network (CRANE) who has organized the participation of EBAN at this important conference. CRANE is also organizing the EBAN Winter University in Zagreb, on 28-30 November, under the Honorary Presidency of the Croatian President. More pictures from the event are available on EBAN’s Facebook page.