Depending on where you are in the world, we are eight to 10 months deep into a global pandemic without an end in sight. When lockdowns were rapidly implemented worldwide in March, the prevailing sentiment was that an economic downturn was coming. Naturally, the thinking went, this would impact venture funding and the IPO markets. That has happened, but not as negatively or in the way many expected. Instead, over the past two quarters, we have witnessed an accelerated shift to cloud-based services that has been both dramatic and likely persistent, as many of these new behaviors seem poised to endure post pandemic. And the IPO market is booming.

A look at the numbers:

Following a strong second quarter in global funding, the third quarter of 2020 has held up with $76.4 billion in venture funding worldwide—up 1 percent quarter over quarter and 9 percent year over year. 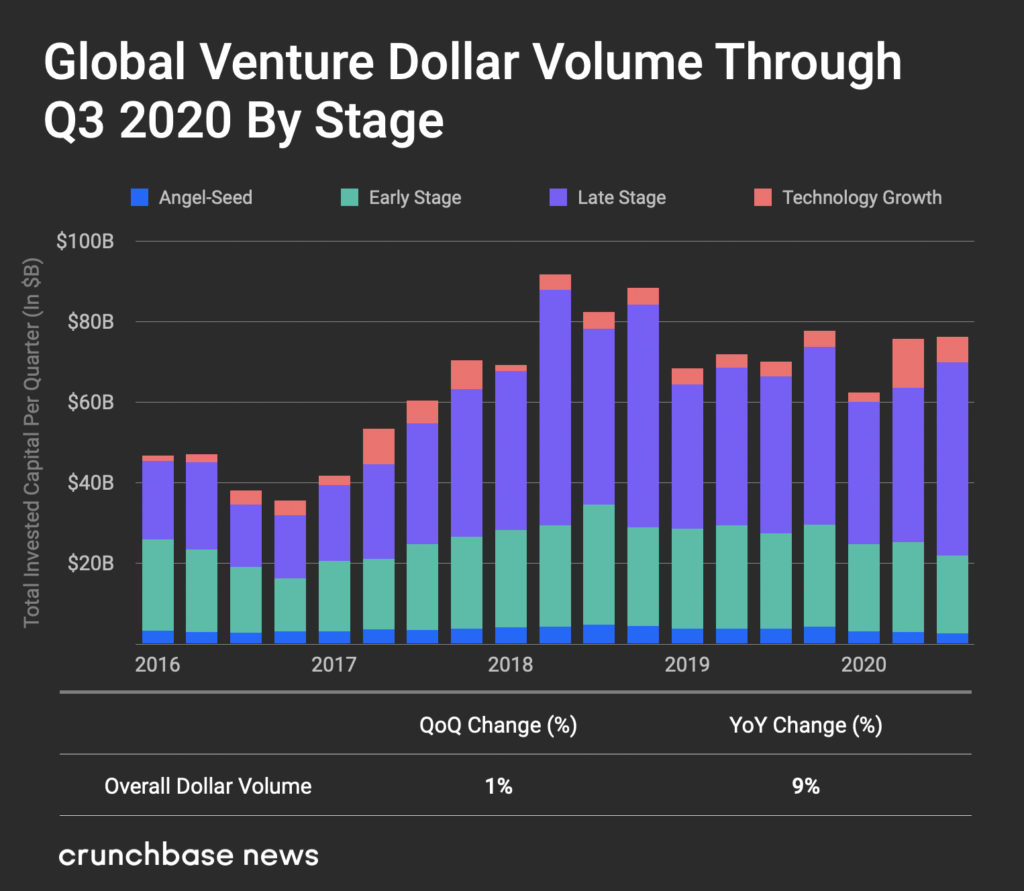 That resilience in venture investment comes amid a sudden change in how we work, learn, shop, dine, travel, consume entertainment and exercise. Neighborhoods are changing with the closure of restaurants and stores while hotels are being repurposed for frontline pandemic workers. Around the world, 1.2 billion school-aged children are not being educated in a classroom, according to the World Economic Forum. And according to a study from Stanford University, 42 percent of the U.S. workforce is working from home. With a high 33 percent of workers not working at all, and the 26 percent of essential workers who are employed on-premises, the U.S. has become a dominant work-from-home economy. Many tech companies have extended their work-from-home periods to July 2021 and some indefinitely. The seismic shift to remote work and school has prompted a boom in cloud-based services and funding for that technology.

“In the last couple years there’s been a trillion dollars of on-premise software that’s transferring to the cloud,” Steve Loughlin from venture firm Accel said in an interview with Crunchbase News. “And that’s just accelerating.” Zoom reported a jump in daily meeting participants from 10 million in December 2019 to 300 million in April 2020, representing a 2,900 percent growth over this four-month time frame. Meanwhile Plaid, which connects users’ bank accounts with apps, experienced a surge in usage constituting a 44 percent increase across its customer base March through May when compared to the same period last year.

A survey conducted by Plaid found that 80 percent of Americans say they have no need for a physical bank branch to manage their finances. New stores created on the Shopify platform, which enables small and medium-sized businesses to sell online, grew 71 percent in Q2 2020 compared with Q1 2020. Crunchbase data shows increased investment between Q1 and Q3 2020 versus the same period in 2019 in health care, apps, payments, education and gaming. Quarter over quarter—when excluding sectors that only showed growth due to a dip in Q2—there has been increased funding to the commerce and shopping, manufacturing, sports, gaming, agriculture and farming, and clothing and apparel sectors.