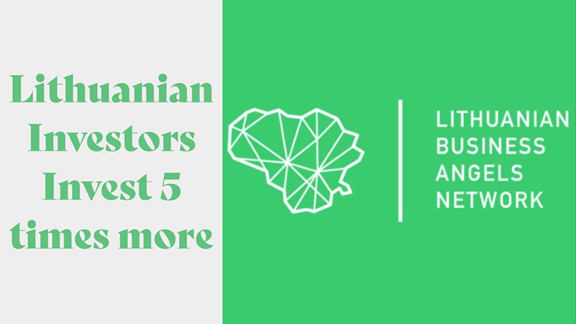 Lithuanian investors have significantly increased their investments in early-stage businesses this year, with their growing popularity and growing startup evaluations.

Such conclusions about the achievements of Lithuanian business angels could be made if we relied on the statistics on investments of LitBAN members this year, systematized by LitBAN the only business angel association in the country.

According to LitBAN, the investments of the network members have increased almost five times this year – from 2.2 million EUR up to 10.4 million Eur. After the completion of several more transactions at the end of the year, the growth of investments exceeded 5 times, says Justinas Pašys, the head of LitBAN.

The growth of the business angel community itself contributed to the growth of investments – the number of members of the association increased from 70 to 201 members in 2021.

The head of the Business Angels Network explains that investments are growing due to increased startup evaluations and increasing popularity of making investments in startups, economic growth and improved prospects, and increased revenue for key businesses.

“The cultural factor cannot be ignored either – investing in startups is no longer just a hobby or a charity for young enterpreneurs,” says Pašys, who notes that investing in startups is becoming part of a diversification strategy for the investments. “Most of the angels don’t walk alone – they invest in groups, so the community aspect is very important.”

Justinas Pašys reveals that “several business angels who are making big invesments” have joined the network this year.

“Some of them are the founders of successful startups,” said the head of LitBAN.

During this year, the network members made an average of 2.4 investments in startups. The statistics of the association show that the average investment of a member in a startup is about EUR 44,000, in a Lithuanian start-up – EUR 35,000. It is true that the median investment is lower – EUR 20,000 and EUR 10,000, respectively, as 20% of business angels have invested 80% of the amount.

“Evaluations of Lithuanian startups are significantly lower than starups from Western Europe and America, where many of our members live. Also, investing in startups is still more popular in the West, and foreigners who are exploring Lithuania have usually been a business angel in their home country for a long time and are looking for opportunities to invest abroad. It is natural that their investments abroad are higher than in Lithuanian startups,” J. Pašys explains the differences between the network members’ investments in foreign and Lithuanian startups.

Out of 10.4 million. EUR, 5.4 million was invested in Lithuanian startups.

25 members of the Lithuanian Business Angels Network are foreigners, another 20 Lithuanians live abroad.

The manager notices that the new members of the association prefer Lithuanian startups. Members living abroad usually invest in startups in their country of residence or of the country they travel to.

“This year, our members have invested in Belarusian, American, Danish, Belgian, Ukrainian, Latvian, Estonian, Spanish, English, Czech, German, even Turkish and Indian startups,” says Pašys. – The choice of investment regions of our members is also influenced by the geography of startups applying to LitBAN. When one startup from abroad receives an investment from our angels, LitBAN also appears on the radars of other startups in that country. We especially notice this in the countries closest to Lithuania. ”

“Oxus.ai”, “Foros”, “Okredo” and “Turing College” have raised more than 1 million Eur. “Cogastro“, “NO-CV“ and “Mindletic“ (emotional health enhancement ap) raised 0.5 million Eur. In all these cases, our member business angels have invested together with various venture capital funds, says J. Pašys. – Syndication of at least ten investments in startups is currently underway. Unfortunately, this information is private and available to members, and we will make the announcement public after the investment is closed.”

It is true that the investments of local business angels are not limited to what LitBAN has to offer during its events. 59% of investments were self-discoveries, such as those discovered in private conversations.

“Every angel that invests more is a mini ecosystem in itself – they receive a lot of offers to invest, they have a wide network of investors,” says J. Pašys.

The most common investments of the Lithuanian Business Angels Network outside the field of LitBAN offerings are the continuous IT and technology learning platform for teachers “Teachers Lead Tech”, “Inbalancegrid”, which develops electric car charging stations, and “Rubedos”, a developer of mobile robotics solutions.

Outside the network, Lithuanian business angels have independently invested in startups in the USA, Hong Kong, the United Arab Emirates and Australia.

One-third of business angel investments have been entrusted to startups that are not yet generating revenue (pre-revenue). J. Pašys VŽatsatsas that only in a couple of years it will be possible to share statistics on the “survival” of startups at this stage.

“Most of the earnings realized by the angels have been reinvested in early-stage startups, which is a victory for the entire Lithuanian startup ecosystem,” says J. Pašys, noting that both startups few years ago were one of the first investments of LitBAN members.

True, joining business angel networks or being a business angel are not the only ways for individuals to invest in early-stage unlisted businesses or companies already preparing to debut on the stock exchange. For example, already for some time the popularity of various equity crowdfunding platforms like “Seedrs” or Estonian “Funderbeam” is increasing. Head of LitBAN states that he does not see any competition.

“Currently, this type of investment is not very popular in Lithuania, we are still a little behind these innovations. However, we see the mentioned platforms as a supplement and a convenient tool for investing in startups. This is an improvement of the ecosystem, from which we would all benefit”, says J. Pašys.