HomeNewsNewsInvesting From Home: the COVID-19 Impact on Venture Funding

Investing From Home: the COVID-19 Impact on Venture Funding 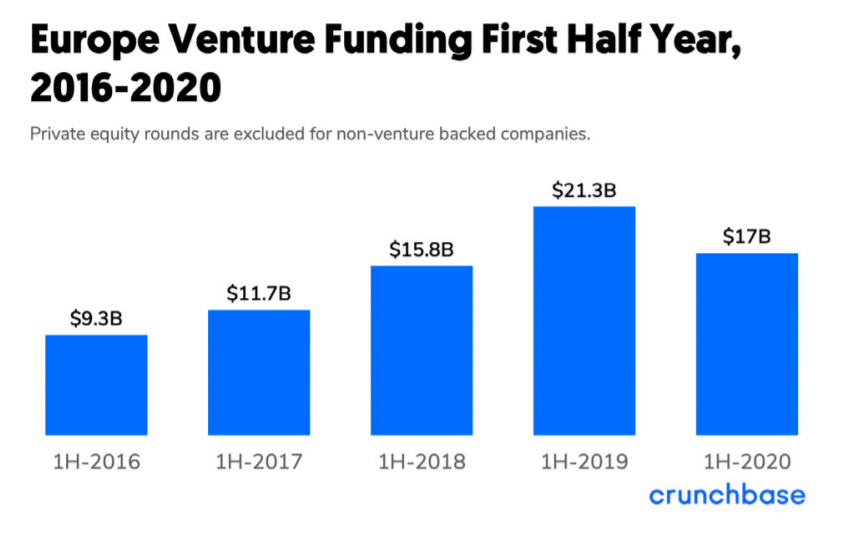 Crunchbase has published a report talking about the impact of Covid-19 to venture funding.

The report suggests that the Covid-19 impact in Europe has been felt as the continent recorded $17 billion in funding in the first half of 2020, down 20 percent from 2019, however, still up from the previous half years. The continent didn’t record any deals over $500 million in the first half of 2020, compared to 2019’s first-half year which had four. The continent did, however, experience an increase in invested amounts to seed, angel and early-stage rounds, with 47 percent of funding going to these rounds in 2020 relative to 42 percent in 1H2019 (and 34 percent globally in 1H-2020).

The report highlights the situation in the following countries:

The United Kingdom still received the most venture funding in the first half of the year with $6.6 billion; although it’s a 22 percent decrease from 1H-2019. France, Germany and Sweden also recorded over $1 billion in the first half of 2020. Belgium saw an increase in funding from 2019, while France and Switzerland maintained similar numbers.

It’s worth highlighting the success of France, considering the size and scale of the country’s venture capital ecosystem and its ability to sustain impressive funding figures during the pandemic. The continent received over $2.8 billion in venture funding dollars in 1H-2020, down slightly from 1H-2019, but still significantly higher than the previous three years. Parisian companies accounted for $2.1 billion, or 76 percent, of France’s funding.

Although the Belgium venture funding ecosystem is smaller than others–such as the U.K. and France–and often doesn’t get the same attention, it’s worth acknowledging its funding growth despite the pandemic. Belgium recorded $604 million in 1H-2020, up from $458 million in the first half of 2019. In 1H-2020, 57 percent of Belgium investment dollars went to seed, angel and early-stage rounds (compared to 34 percent globally).