From “Seeders MBA” to “Seeders Accelerate”

From “Seeders MBA” to “Seeders Accelerate”

IM Capital is a 20 Million USD program funded under USAID, to provide Matching Capital, Equity Guarantee, and Support Programs to a broad range of qualified early-stage businesses and investors in Lebanon. The program works to provide needed support to early-stage businesses in order to create and sustain jobs, advance and develop the investment eco-system and encourage increased equity investment in early stage businesses, contributing to the goal of increasing the availability of equity capital for new, innovative, early business start-ups and existing small and medium businesses. 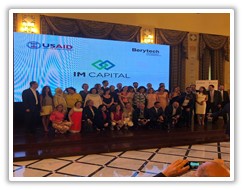 With its investment components, IM Capital contributed to the development of the Lebanese startup eco-system by launching several new initiatives, like the first seed startup accelerator “Speed@BDD” which graduated 35 startups, a mentorship platform based on MIT Venture Mentoring Service model (Confideo) with more than 60 mentors trained, and a coaching program for SMEs based on Stanford Seed methodology. It also created and managed the first structured business angel groups, SEEDERS and the Lebanese Women Angel Fund (LWAF), the latter being the first such network of businesswomen that invests in women-owned businesses in Lebanon.

IM Capital created SEEDERS in 2016, the first structured and syndicated Business Angels program in Lebanon, in an effort democratize and crowd-source angel investing by building small communities of business angels. The program builds capacity for novice individual investors through an MBA (Masterclass for Business Angels) that spans from September to July every year, and follows a “Learn & Earn” methodology, mixing investment sessions and capacity-building workshops over a 9-months “academic” period. The angels get to meet every 6 weeks to attend pitches and workshops and invest their personal moneys in startups; participating tickets are $15k per investor per MBA, with 50% capital guaranteed by IM Capital. A co-equity fund by the World Bank in Lebanon has also topped the angels’ SPVs by 1 and 1.5 times, the groups reaching collectively a $2.8M of capital raised for Lebanese startups.

Till July 2019, 4 angel groups were created and 105 graduated Angel Investors through the MBA programs, 18 Deal Leaders and 4 Group coaches certified. More than 25 Investment sessions with 120 startups pitched in front of the angel investors, and more than 10 ventures were funded by the angels, covering sectors such as SaaS, Platforms & Marketplaces, Education, Hardware, IOT, Arts & Design, and Entertainment, creating a diverse portfolio and filling a funding gap, with investment tickets ranging between $100K and $200K per startup.

The seeders/LWAF program was such a success that it got interest from business angels in the region such as Jordan and Egypt to be replicated in their eco-systems.

The 5th SEEDERS/LWAF group started in September 2019, with a batch of 24 angel investors and an investment vehicle of $900K, and then an economic crisis hit Lebanon in October 2019, following the uprising of the population against the corrupted governing system. Devaluation of the local currency, capital controls and lack of liquidity in banks plunged the country into financial chaos and uncertainty. As a result, all the Lebanese entrepreneurial eco-system collapsed, the existing VCs disappeared, so did the support programs and accelerators.

Amidst such situation, valuation of startups became an impossible exercise, and hence the SEEDERS MBA program was unable to make a single investment during the “academic year”. The group had to pivot to another model, to keep searching for opportunities not to keep their monies stuck in banks in such risky situations. The program shifted to an “Accelerator” model, to inject capital into a cohort of startups to develop their MVP between 3 to 6 months, with a fixed financing scheme: Inject a small investment ticket of up to $50K into each startup (+ equivalent of $50K in-kind) for 5% of the company, with follow-on funding from the SEEDERS SPV depending on milestones and KPIs. The deal flow would come from:

(1) startups that pitched to Seeders LWAF previously, but not qualified due to their seed stage

The program objectives is to (1) identify promising startups, (2) provide capacity building to the entrepreneurs, (3) provide venture building sessions focused on helping the founding team in planning and launching their MVP into market, (4) provide the Initial seed funding and opportunity for follow-on funding. The startups would also benefit from access to a network of mentors and access to workspace within the premises of IM Capital.

The selection process was done with a small number of business angels from the current group, and each selected startup would have one angel as a coach for follow-up. The program selected 10 startups as a first cohort, and started implementing the accelerator program.

As a preliminary direct result of this program, one startup, Digital Prestige, who was hosted in the accelerator, already “graduated” into its own space and is now a team of 10.

The program is being approached by family offices that want to partner to offer investments in startups as an alternative asset class for their clients (individual investors) and to diversify their investments from real estate and traditional asset classes.