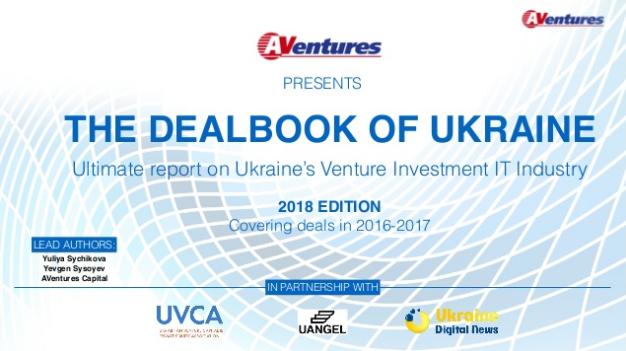 Over the last few years Ukraine has seen its digital markets and innovation scene grow very fast. Ukrainian startups (or startups founded by Ukrainian entrepreneurs), raised $265 million in 2017, up 231% from the previous year. This is one of the key findings of “The Dealbook of Ukraine,” an annual industry report published by AVentures Capital in partnership with local industry associations UVCA (Ukrainian Venture Capital & Private Equity Association) and UAngel, as well as Ukraine Digital News.

According to the Dealbook, there were 44 disclosed investment deals in 2017, 90% of  which were led by foreign investment funds (i.e. General Catalyst, IVP, Spark, Almaz Capital) with the participation of local funds in the majority of the rounds.

“The fact that more than $630 million were invested in Ukrainian startups over the past years signals the industry’s resilience amid the country’s economic and political challenges,” said Yevgen Sysoyev, managing partner of AVentures Capital and co-author of the Dealbook. “We are proud that AVentures was the first ever venture capital fund launched in Ukraine and, remains one of the key players in the investment market along with Horizon Capital, Digital Future, TA Ventures and international fund”.

The past two years were marked by the entry of Netflix and Uber into the local market; most recently an international consortium launched the preliminary studies for a Hyperloop project in the country, while the $1billion acquisition of video doorbell firm Ring by Amazon illustrated the Ukraine’s excellence in software R&D.

The Dealbook also lists the Ukrainian tech startups which grew the most over the past years to become major players in their industries. These companies include Attendify, BPMOnline, Depositphotos, Grammarly, Jooble, Petcube, Readdle, Starwind Software, Zeo Alliance, among others.

The Ukrainian startup and venture scene is also highlighted in a regional study released almost simultaneously by East-West Digital News. The report “Startup Investment and Innovation in Emerging Europe” encompasses 24 countries of the region with a rich set of data and insights about the local innovation landscapes. More info: http://www.ewdn.com/files/cee_media.pdf

Founded in 2012, AVentures Capital is a leading venture capital fund focused on global companies that leverage R&D in Ukraine and CEE. The fund targets the following IT categories: software, e-commerce, cloud services, mobile technology, IoT and others. AVentures Capital has over 10 companies in its portfolio, including Augmented Pixels, nuPSYS, Petcube, Spinbackup, StarWind Software, Rallyware, Bookimed, Teamfusion, CoreValue and others. AVentures Capital  portfolio companies mostly focus on the U.S. market and raised follow on round from internationalfunds. Learn more: http://aventurescapital.com/